What is IT Infrastructure? - The Backbone of Technology

When most people think of Information Technology (IT), they generally think of software and software development. The initial assumption is that IT teams are composed of people who know how to write code, develop websites, and conduct quality tests. This is all true, however software also needs something to run on – hardware. The IT Infrastructure is the full system of hardware that allows software to run and people to communicate both within a business, and externally.

Joe Roush put it really well in his IT Infrastructure blog when he said “I like to think of infrastructure as everything from wall jack to wall jack. Thinking of infrastructure in this manner enables effective conversations with those who are less familiar with the various components.”

When you walk into a data center, you are looking at the heart and soul of the IT Infrastructure. While we won’t cover everything that makes up and IT Infrastructure, let’s dig into a few of the main components. 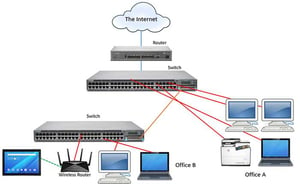 A switch is one of the devices you find in a data center that connects all devices together. They allow components like computers, printers and servers to talk to each other on the same network. There are two types of switches -unmanaged and managed. An unmanaged switch would likely be found in your home or in a smaller environment. These require no configuration and simply work when they are plugged in. Managed switches provide higher security and are configured to custom-fit your network. Managed switches are found in larger business settings where more control and security are required.

A Network Hub is the central coection point for devices in a local area network (LAN). Hub-based networks often become slower when a lot of devices are connected to them. To mitigate this, larger organizations often include multiple switches that connect different groups of computer systems (think mini networks within the business). These switches are then connected to a router allowing the networks to communicate with each other and the internet. If you are a visual person, think of switches as the center of a spider web. The router connects the webs together to allow them to communicate.

Switches and hubs are very similar, but switches are more intelligent. When one computer wants to communicate with another computer, a switch can direct the data directly to that device. A hub on the other hand will communicate data sent by one computer to all other computers that are connected.

While switches and hubs are meant to create networks, routers are designed to connect networks. Say you work in the sales department at a large company (network 1) and you need to communicate with the project management department (network 2). The data you send would enter the switch in your network (network 1), which would direct it to a router. The router then acts as a traffic conductor and sends the data package over to the switch for network 2, the switch then directs it to the specific IP address that you are trying to communicate with. Check out this video, it does a great job at showing how switches, hubs and routers work together.

Each business or enterprise has a unique network setup, and it all depends on the size of the business and how many users there are. This is a very basic explanation of how devices communicate with each other and it’s easy to see how complex it can get as businesses grow.

Returning to the Office: Assessing Your IT Infrastructure

An IT infrastructure assessment or site survey site survey analyzes how well your IT network is functioning.

A company in the public cloud still requires sound IT Infrastructure to be deployed professionally.