Wi-Fi 6 is the latest generation of wireless internet bringing performance improvements aimed at reducing limitations from its predecessors. Also known as 802. 11ax, Wi Fi 6 was first introduced in 2019 and became part of the official IEEE specification in September 2020. The Institute of Electrical and Electronics Engineers (IEEE) is a professional association that develops, defines, and reviews electronics or computer science standards. It is based in the United States but develops standards that are used internationally.

Is Wi-Fi 6 faster than previous generations?

Wi-Fi 6 is often referred to as simply being a faster option than Wi-Fi 5, which is partially true. Technically, it does allow single users to obtain a data rate that is 37% faster than Wi-Fi 5, but more importantly it offers four times the throughput per user in crowded areas. When we talk about crowded areas, we mean areas where a lot of internet-connected devices are working at the same time. This can mean a stadium, workplace, or shopping mall where many people are using mobile devices simultaneously. It can also be a home where there are many internet-connected thermostats, door locks, gaming consoles and mobile devices. Every internet connected device pulls from a router and each router can support a finite number of devices. You have probably noticed slower speeds or lagging when someone is video chatting, streaming a TV show, and playing an online video game at the same time in your home. 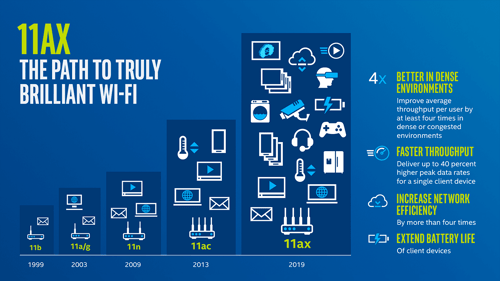 Wi-Fi 6 enables a much higher volume of devices to run simultaneously. The average amount of internet-connected devices has skyrocketed over the past 10 years and will continue to rise as technology advances. According to The Verge, when Wi-Fi 5 was released in 2013, each household had an average of 5 Wi-Fi devices in it. It is predicted that the average will be around 50 devices within the next couple of years. Added devices take a toll on your network, but Wi-Fi 6 will allow for dozens of devices to operate efficiently on a single router.

Another benefit of this new generation of wireless internet is the positive effect on device battery life. Wi-Fi 6 devices allow for planned communication with routers, which reduces the amount of time spent searching for signals. Cell phones and laptops are almost always searching for signals while they are turned on so you may not see an increase in battery life there, but small household devices such as sensors or thermostats will. This feature is called Target Wake Time, which allows for scheduled router check-ins on certain devices that do not need to be constantly connected.

Well, you would need to purchase new devices. New smartphones and other electronics are being released with Wi-Fi 6 capability, so chances are you already have some of them. However, older smartphones, gaming consoles or laptops will not be able to benefit from this new generation. You also need to have a Wi-Fi 6 router, which is available on the market but will cost more than a previous model. This does not mean you need to run out and purchase all new devices, but as you update them you will notice the benefits of Wi-Fi 6 and decreased latency throughout your space as your family goes online.

As we navigate safe ways to reopen offices, retail stores, schools and other types of businesses during COVID-19 we are discovering new technologies.

There are a ton of options for voice applications or UCaaS solutions on the market, we have created a list of 10 questions to help you decide on a...

A common question we hear when customers are considering implementing a UCaaS solution is whether it will be secure. Yes, UCaaS Solutions are secure.